Here are a couple more cards that I took to swap at convention.  I didn't make very many of them but I should have!  They were very popular! 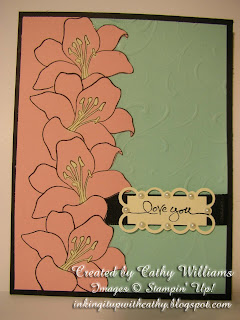 This card was made by stamping the flower with Basic Black ink onto Pretty in Pink cardstock at the bottom.  I then stamped it onto a Post-It Note and masked it.  I then turned the stamp a little to the left and stamped again.  I removed the mask from the first flower and placed it onto the second flower and stamped the third one, again rotating to the right.  I continued this until I reached the top.  I then took a toothpick and a little bit of cotton from a cotton ball and, using bleach, traced on the inside of the stamen on the flowers to bleach the color out.  I then cut along the right side of the flowers and attached it to Pool Party cardstock which had been run through the Big Shot with one of the Texturz plates.  It was then finally mounted onto Basic Black cardstock.  The ribbon is 5/8" Satin in Basic Black and the "love you" came from the Short & Sweet stamp set.  I used the Scallop Trim Border and Scallop Trim Corner punches for the label.  That took a couple of attempts to get it to work out correctly but I was very pleased with how it looks. 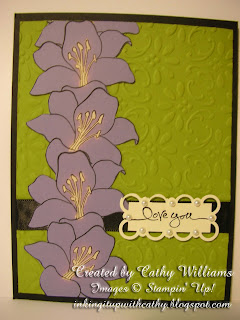 This is the same card except I trimmed both sides of the flowers which were on Wisteria Wonder cardstock and the backgrom is Old Olive.
Let me know how your attempts at making the label turn out!  If you are interested, I can always do a little tutorial!
Posted by Inking it Up with Cathy