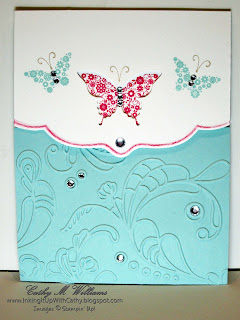 Here is another card where we used the Borders Plate.  The card is a gate fold card but is a horizontal one instead of vertical, or is that vertical instead of horizontal?  Oh well, you  can figure out what to call it.  Also, it is not actually meeting at the center.  The top is scored at 2 1/4" and the bottom is scored at 3 1/4".

The larger butterfly is stamped on a separate small piece of Whisper White cardstock.  We punched out the butterfly using the large butterfly punch as far up as the scored piece allowed.  If you look closely at the picture below, you can see that the scored/punched piece (after stamping the smaller butterflies) was attached to the top of the card using dimensionals.  In between those two (adhered to the card) is the small piece with the butterfly stamped on it.  The easiest way to do this is to attach it to the scored/punched piece using dimensionals on either side of the butterfly and then attaching it to the card. 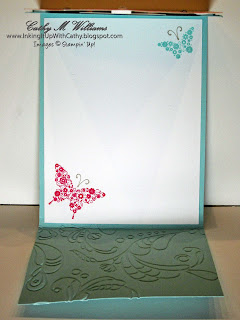