Here is the third card in the Serene Silhouettes card class. 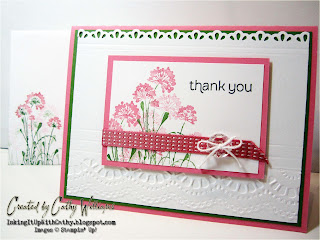 This Regal Rose card was layered with Gumball Green cardstock and then a Whisper White piece which was embossed using the Delicate Designs folder and cut at the top with the Finishing Touches edgelit.
The paper was then scored next to the cut portion twice with an 1/8" separation between score lines.  Down near the embossing, it was scored three times with a 1/4" separation between score lines.
The image was done using the "thank you" from the Made for You stamp set and the flowers were colored using Gumball Green and Regal Rose markers.  The image was then stamped three times without inking between stampings.  Between each of the stampings, I moved the stamp down and to the right or down and to the left.
The card was finished off with some Stitched Satin ribbon and a Faceted button tied with baker's twine.

Posted by Inking it Up with Cathy

Email ThisBlogThis!Share to TwitterShare to FacebookShare to Pinterest
Labels: Big Shot Dies and Embosslits, Made for You, Serene Silhouettes