This month I held a Serene Silhouettes class which included the stamp set and four cards made using the four images used in the set.  Again, I found inspiration for these cards from the gallery at SplitCoastStampers.
Here's the first card: 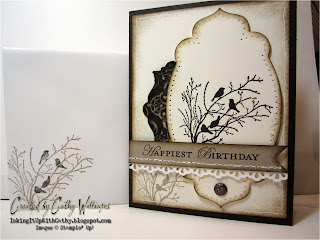 On this card, we stamped the birds from the Serene Silhouettes stamp set in Crumb Cake on the bottom left of the first layer of Very Vanilla matting.  We cut the Early Espresso Core'dination paper using the Apothecary Accents framelit, ran it through the Big Shot with the Lacy Brocade embossing folder from the Holiday catalog.  We then sanded it to get the two-tone look.  The birds were then stamped in Early Espresso on Very Vanilla which was cut with the Apothecary Accents large framelit and pierced using the Essentials Paper Piercing Pack.
The sentiment is from the Apothecary Art stamp set and was stamped on Crumb Cake using Early Espresso ink.  We then pierced along the bottom and used the Signo gel pen to represent stitching.  A piece of Whisper White was cut using the Finishing Touches edgelit and placed below the banner piece.  Everything was sponged using Soft Suede ink.  Finally a Neutrals glimmer brad was placed at the bottom.
On the envelope, I inked the stamp in Crumb Cake and then colored over the birds with Early Espresso and then stamped to get the two tone look.

Posted by Inking it Up with Cathy